Banks utilize the target range, the “FFTR,” for the federal funds rate as a starting point to establish the interest rates they want to charge for loans. Banks also use other factors to set their interest rates. The bottom line is that banks want to maximize profits, through the Net Interest Margin. The Net Interest Margin is simply a ratio that measures how successful the bank is investmenting funds compared to the expenses on those investments. Banks want to show shareholders gains, not losses. However, banks also realize consumers and businesses seek the lowest rate possible

It’s no secret banks adjust interest rates based on risk and the lower the risk, the better the interest rate for a borrower. When borrowers have a high credit score, put up collateral or a large down payment, and use services from the same bank (checking, savings, brokerage, mortgage) they may get a discount on the interest rate. Another strategy may be for a borrower to borrow during a down economy or when uncertainty is high, such as inflation or a volatile interest rate environment, in order to get a favorable rate. So, under these circumstances, a bank may be especially motivated to make a deal or give you the best rate possible. Borrowers who seek out a loan or rate with government backing can also secure the lowest rate possible. The U.S. weekly averages as of February 7, 2019, as reported by Mortgage buyer Freddie Mac, are:  30-Year Fixed Rate Mortgage, 4.41%, 15-Year Fixed Rate Mortgage, 3.84%; 5/1-Year Adjustable Rate Mortgage, 3.91%.  This is a 10-month low; however, the current rates are still above last year’s rates by .09%; 30-year Fixed Rate Mortgage rate averaged 4.32%, compared to the current 4.41% rate for a 30-year Fixed Rate Mortgage rate. 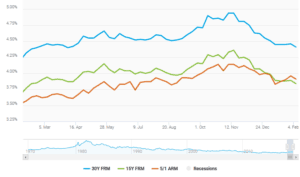 The decision by the FOMC to not increase the Federal Funds Target Rate means banks will keep their interest rates steady as well. This means the Spring of 2019 will be a great time for borrowers to secure mortgages from lenders at historic low interest rates before interest rates increase in the coming months or year.

The Federal Funds Target Rate History from 1990 to present is available to view by clicking here.

Contact Bill Today To Help You Find Your New Home